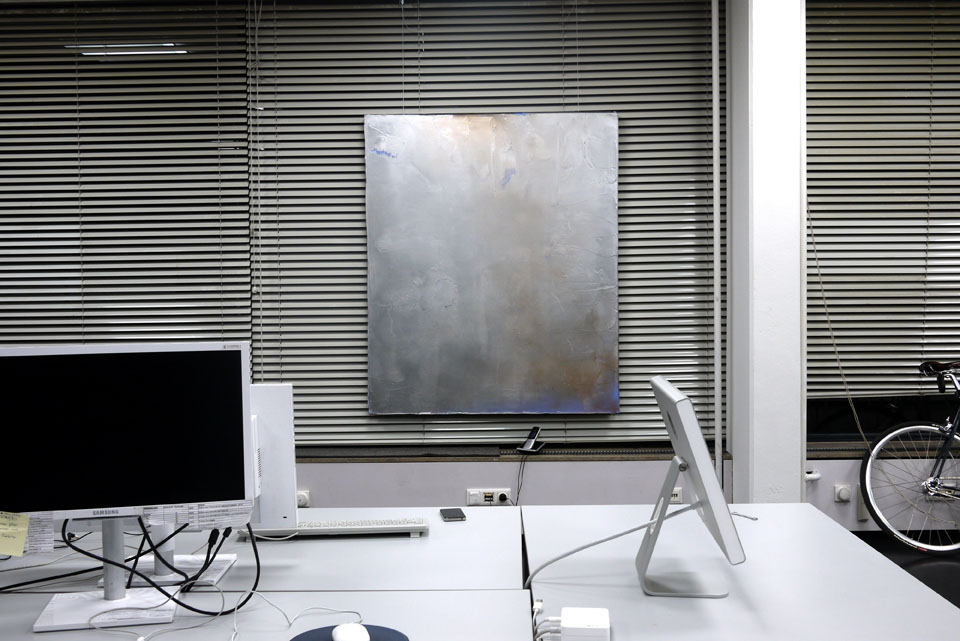 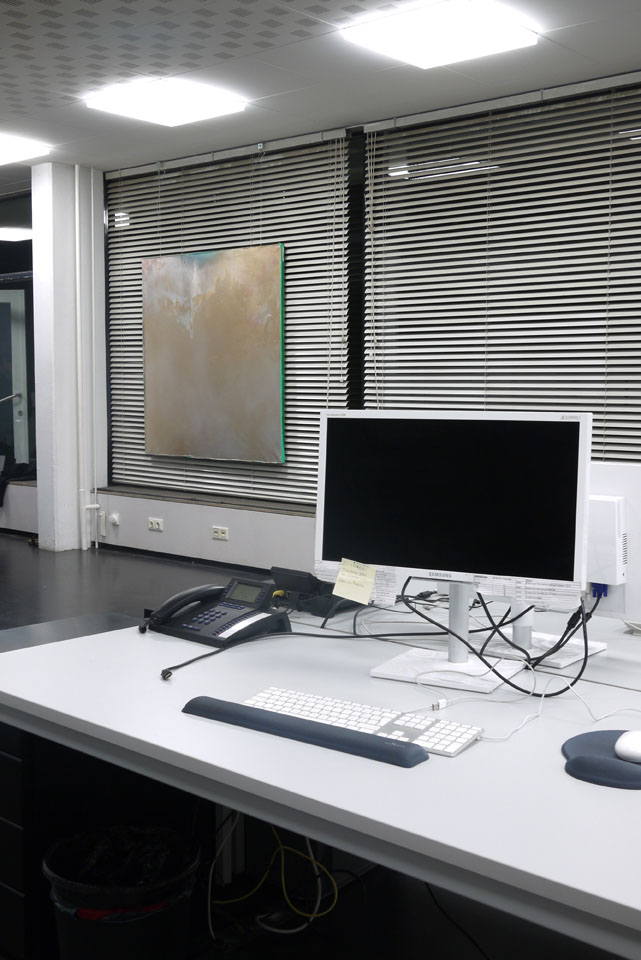 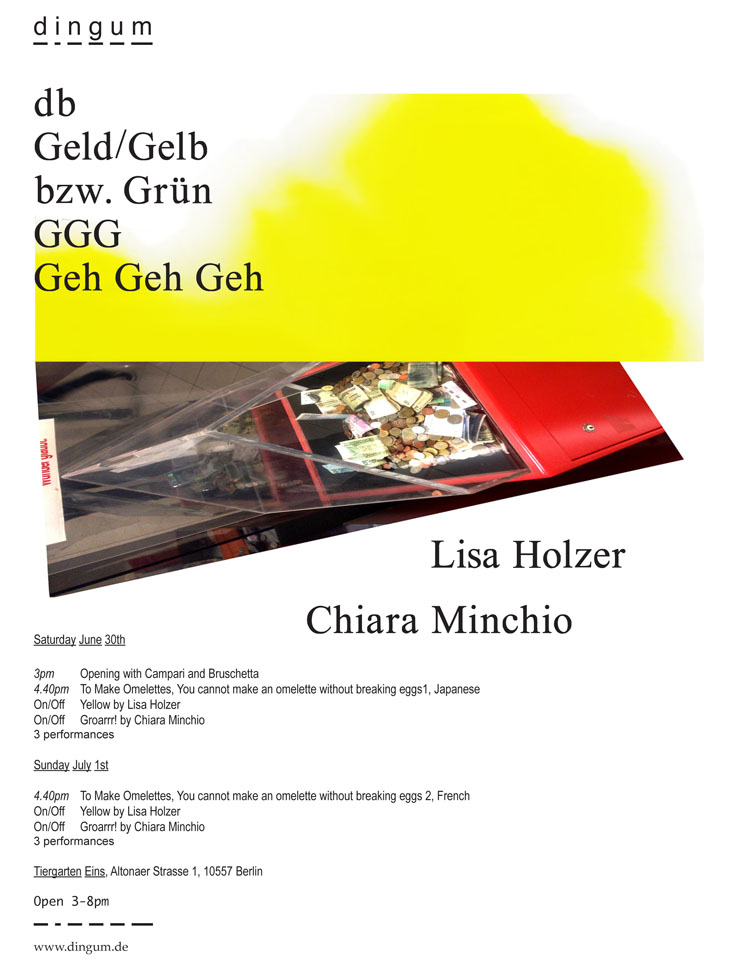 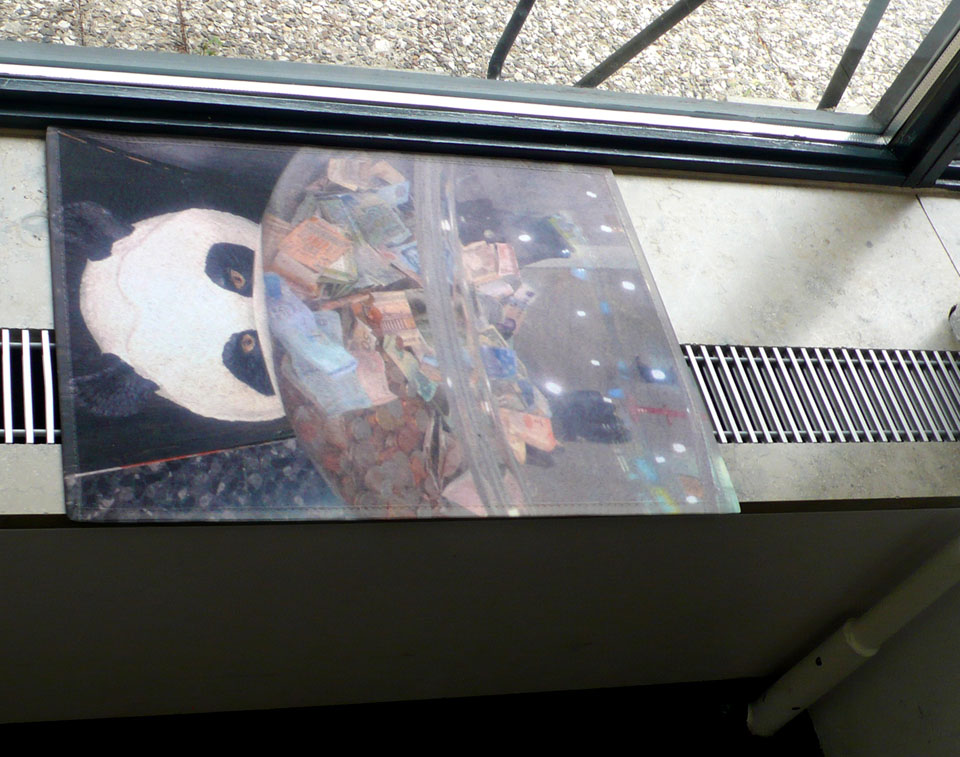 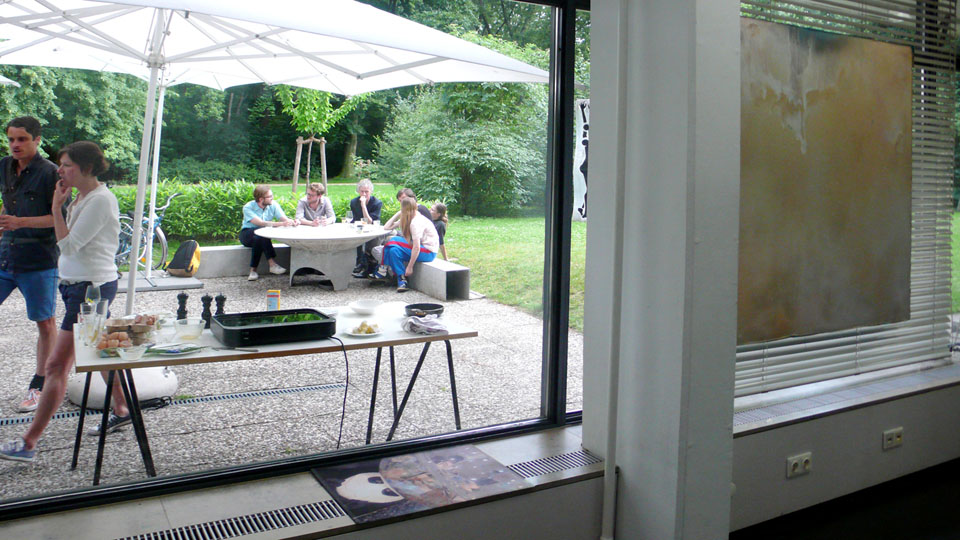 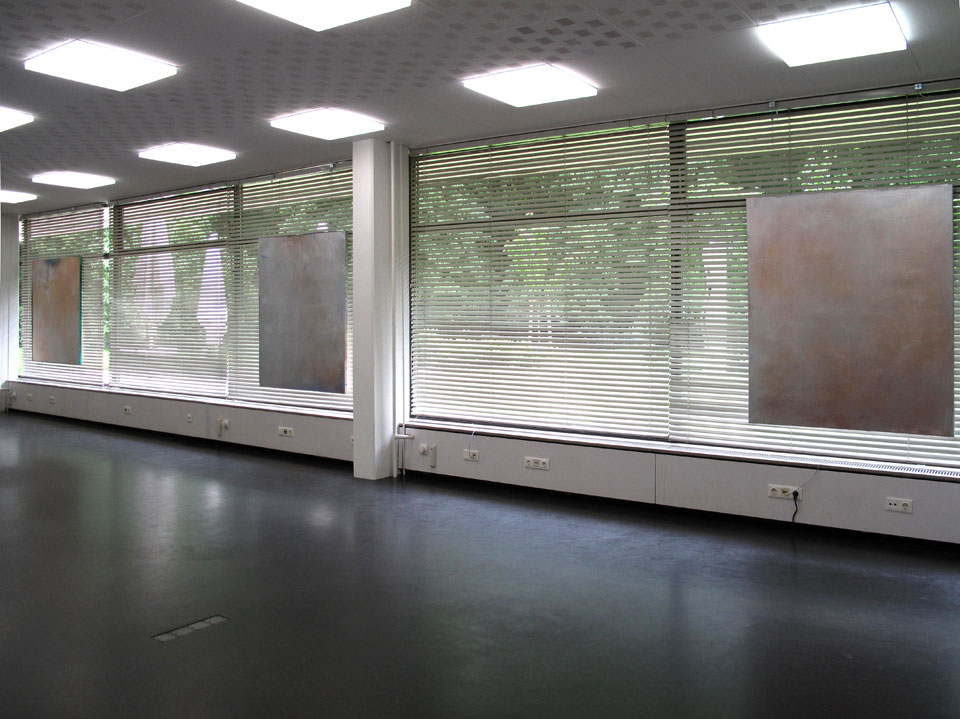 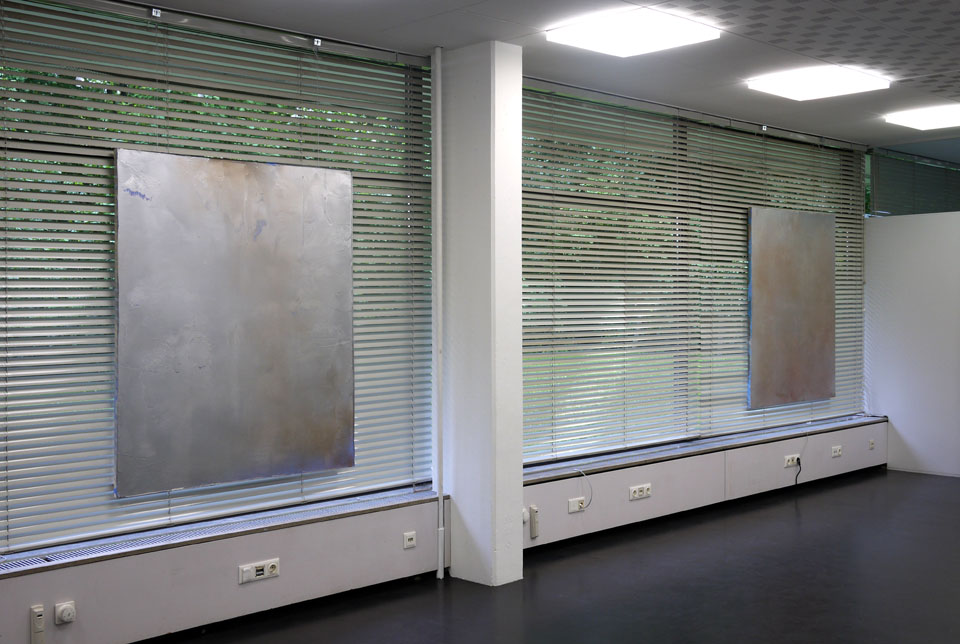 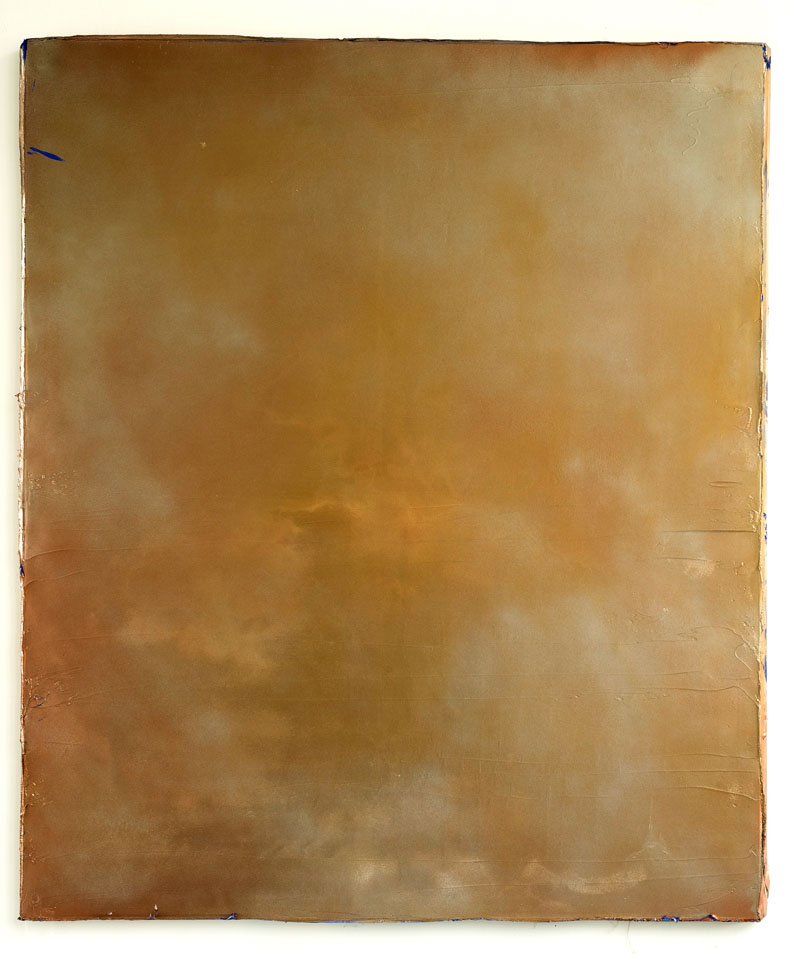 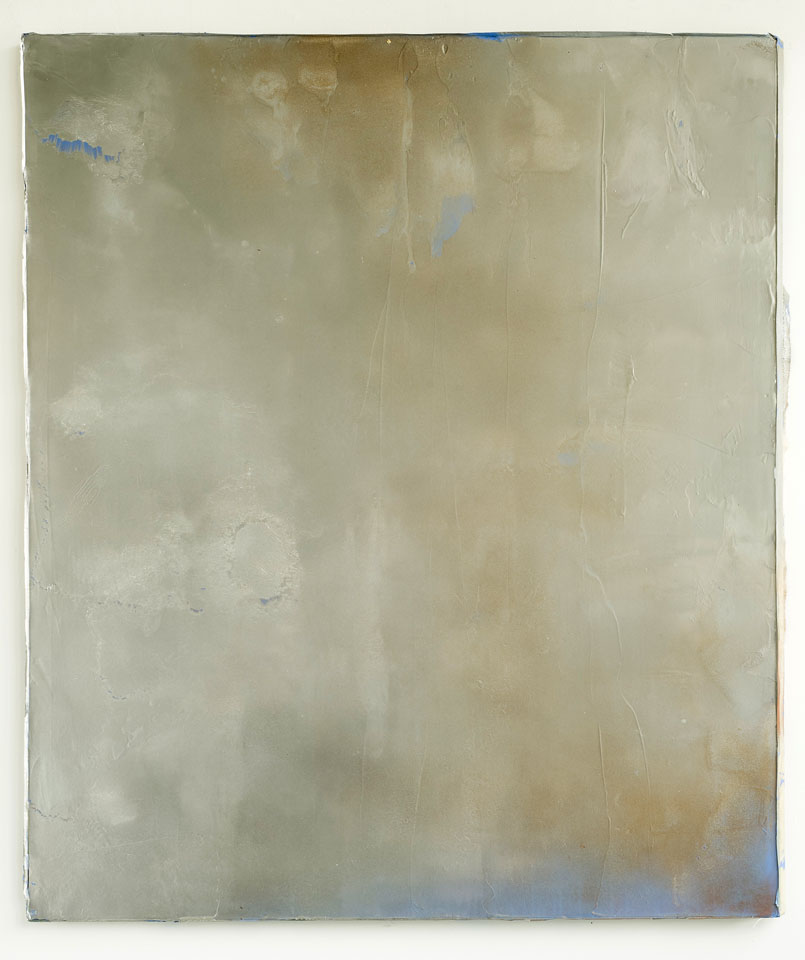 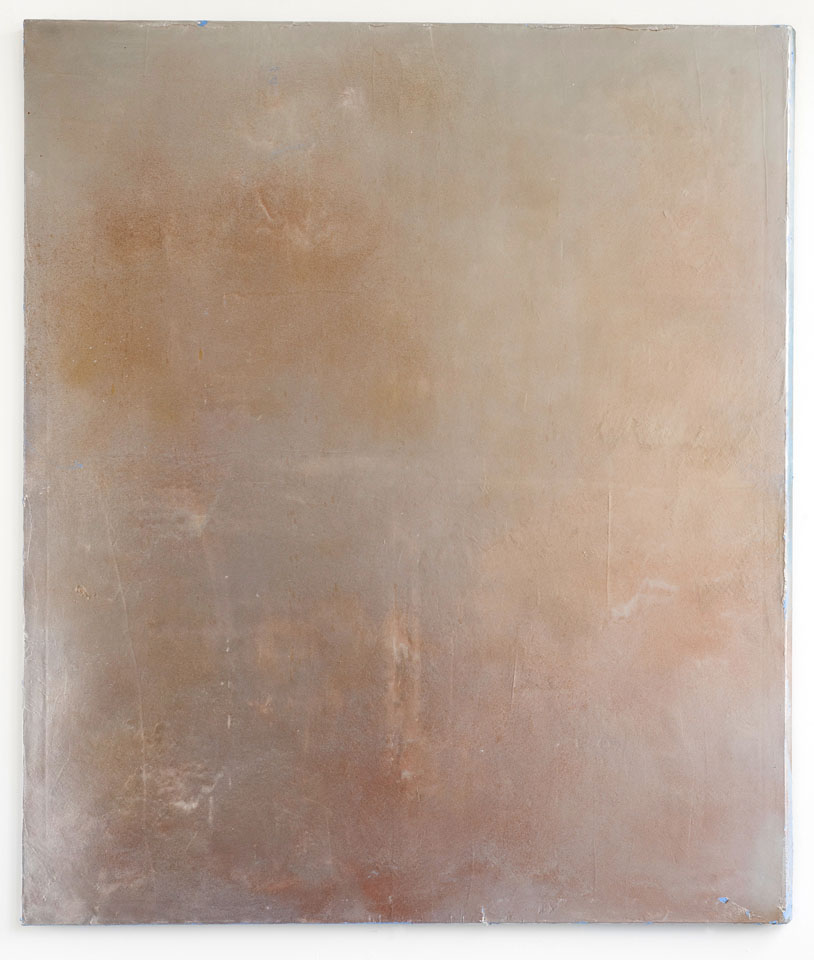 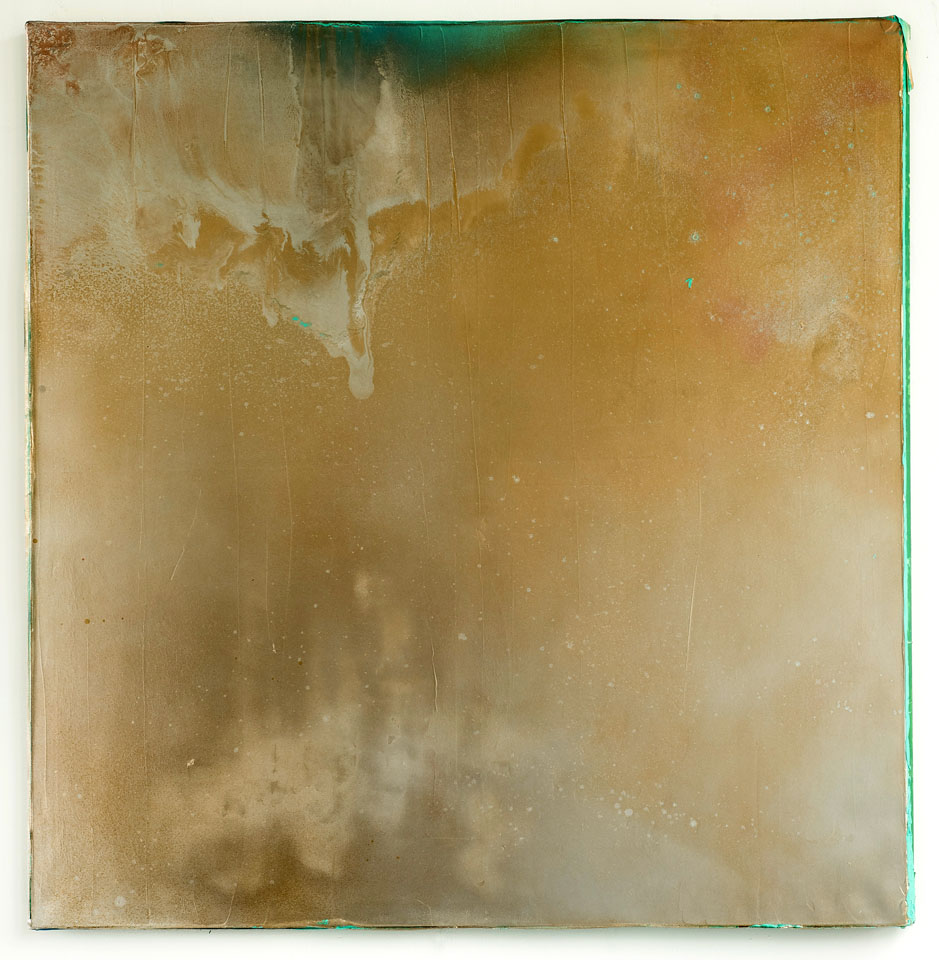 The canvas – allowing air to pass through, flexible.
The foundation – traditionally consisting of hide-glue, chalk, zinc white, linseed oil. The primer is applied several times in thin layers: it is sanded down, allowing it slowly and thoroughly to infiltrate and become a part of the canvas texture. A direct contact between the canvas (linen) and the oil colour (linseed oil) without a primer in-between, would lead to decomposition, it would dissolve and disintegrate.
The oil colour. Thinned down, it is applied onto the primed canvas. This applied layer may be thicker or thinner. The colour corresponds with money found in my pocket. The amount and currency are irrelevant. The oil colours blend together creating a monochrome painting. The fourth layer is varnish colour, applied with a spray can (graffiti colour, the pre Photoshop colour). The varnish is sprayed onto the entire oil painting in the colours of the cent coins. Basically the whole spectrum of metallic colours I could find on the market. The varnish layer smothers the oil painting. The oil painting fights its way through, creating cracks and displacements, in search of air. Devoid of air, the oil is unable to become a painting.
All four layers rub against each other, creating a movement against and with one another.
A freshly sprayed surface is smooth and glossy. Like a freshly pressed coin. Beneath the fixed, shiny surface of the varnish, the oil moves. As time passes by, it loses its initial shine. This drying process happens autonomously. The result is always different: sometimes the primer is stronger, sometimes the oil colour is stronger, and sometimes the varnish colour is stronger.
The meaning of Abstraction is amongst other things: the dismantling of the picture composition (the perspective, Renaissance). Deconstruction is a negative working process. The intensity of the visual abstraction lies in this negative process. For me, the creation of these monochrome paintings is an extension of this negative working process. The oil painting is prohibited from breathing.

The deconstruction of the picture closely mirrors the abstraction of monetary value, the transition from real money to credit money, from “covered“ to “uncovered“ monetary systems. A cent-work consists of “covered“ and “uncovered“ layers. 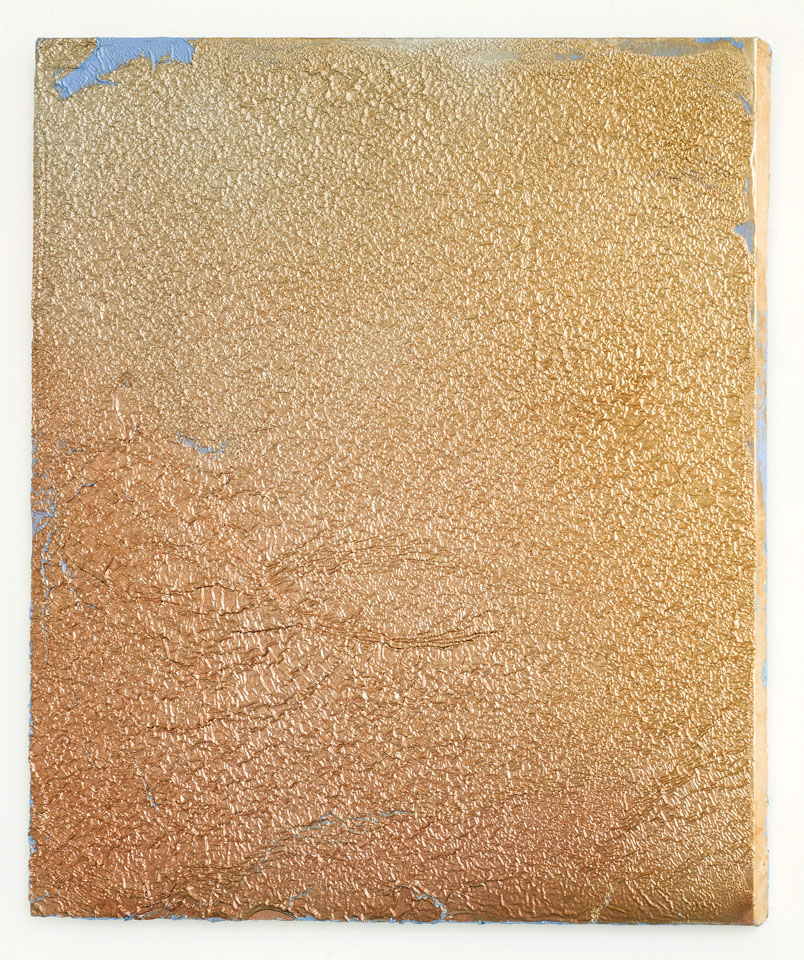 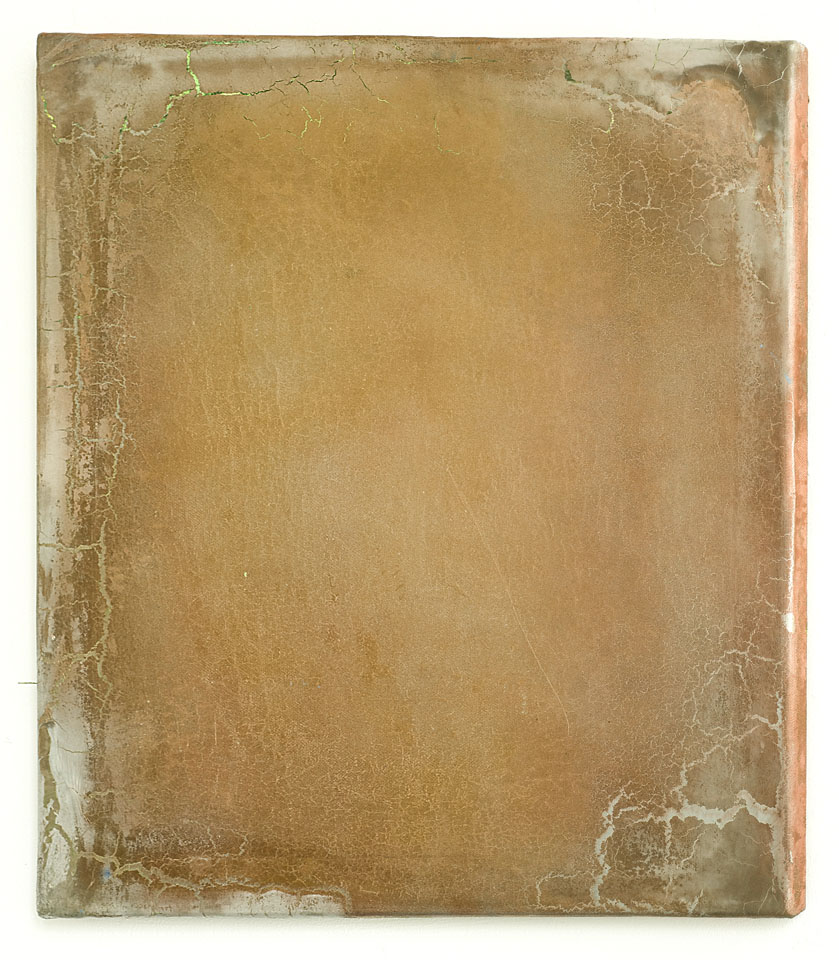 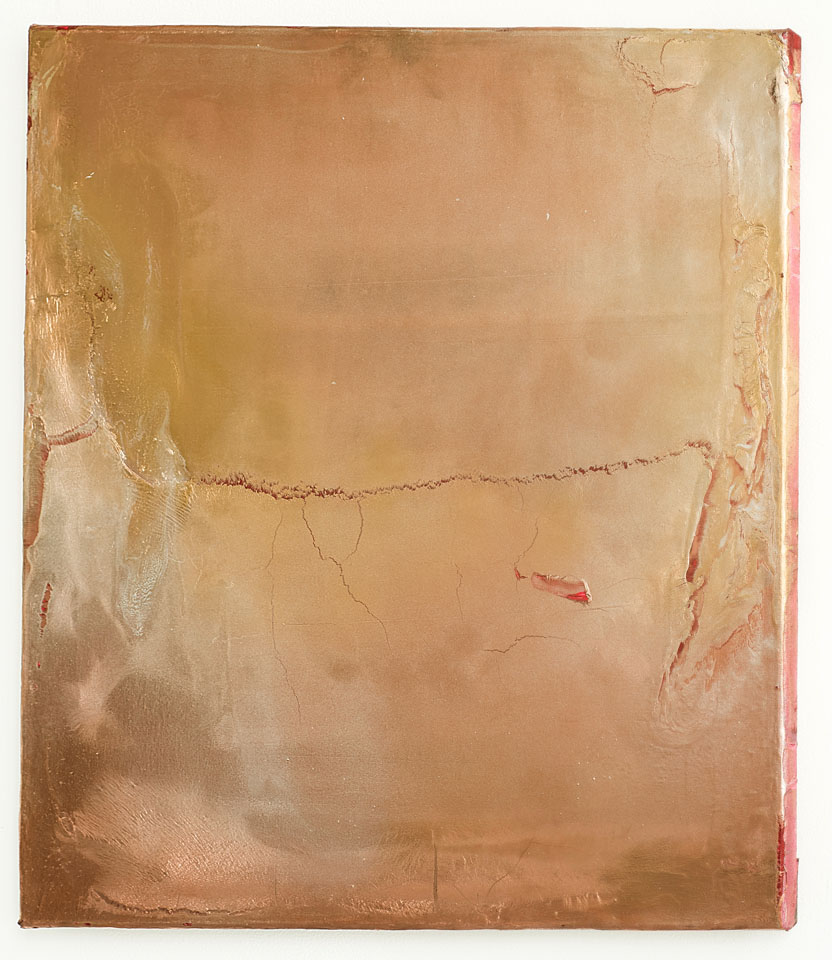 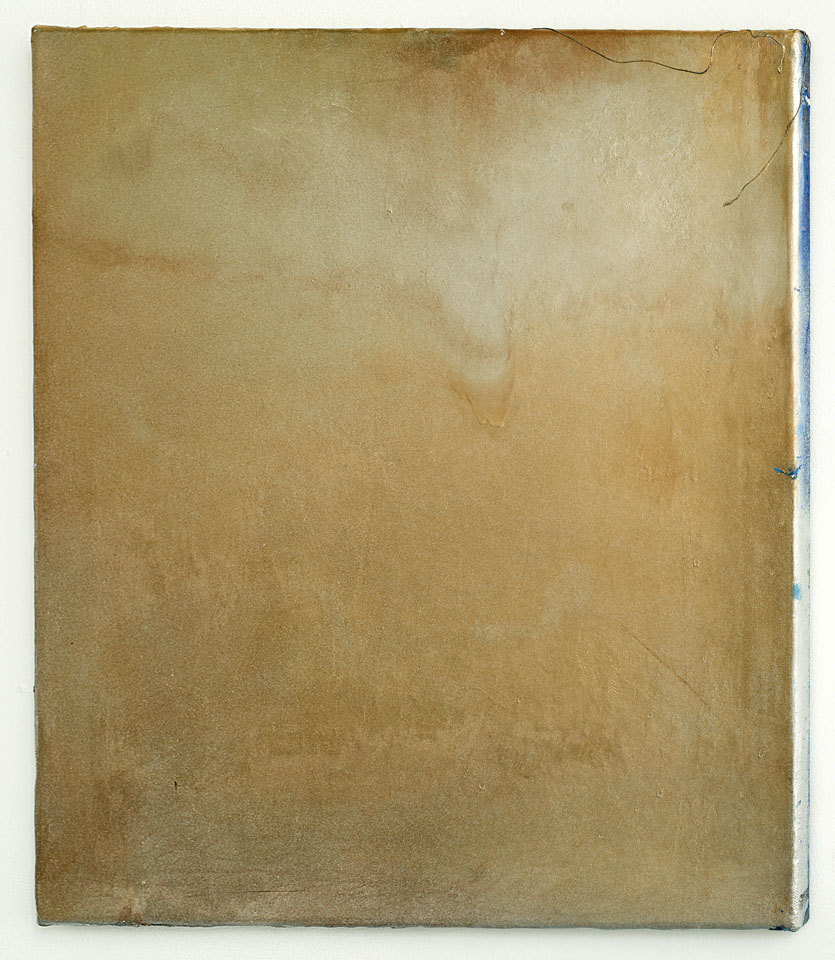 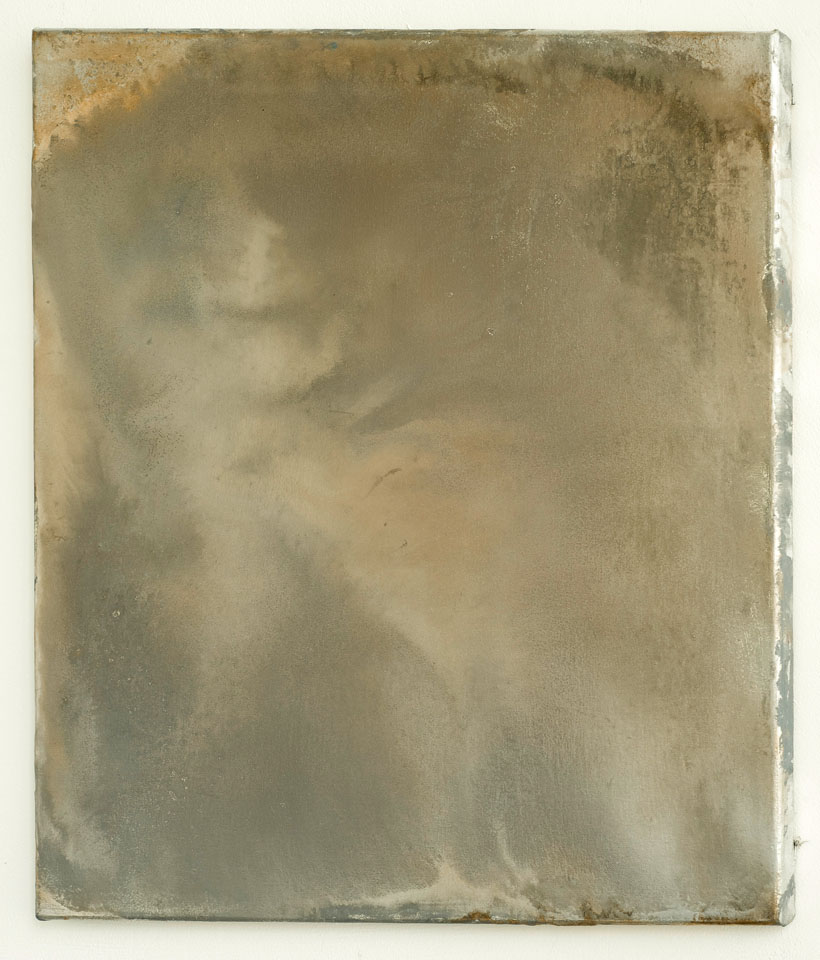 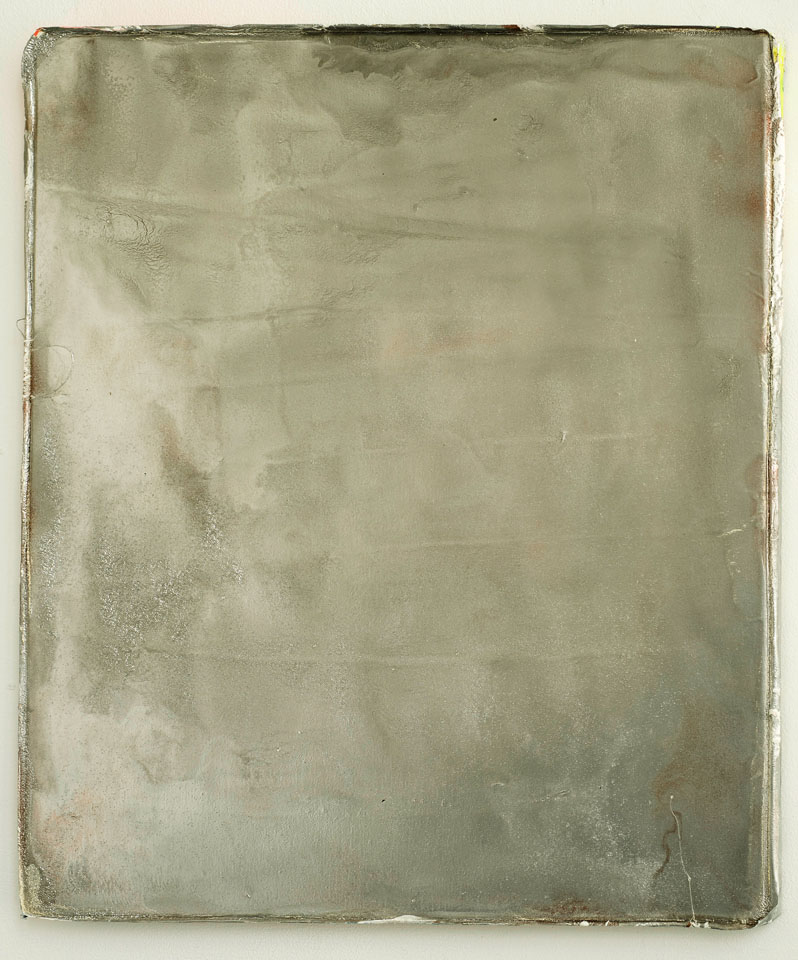